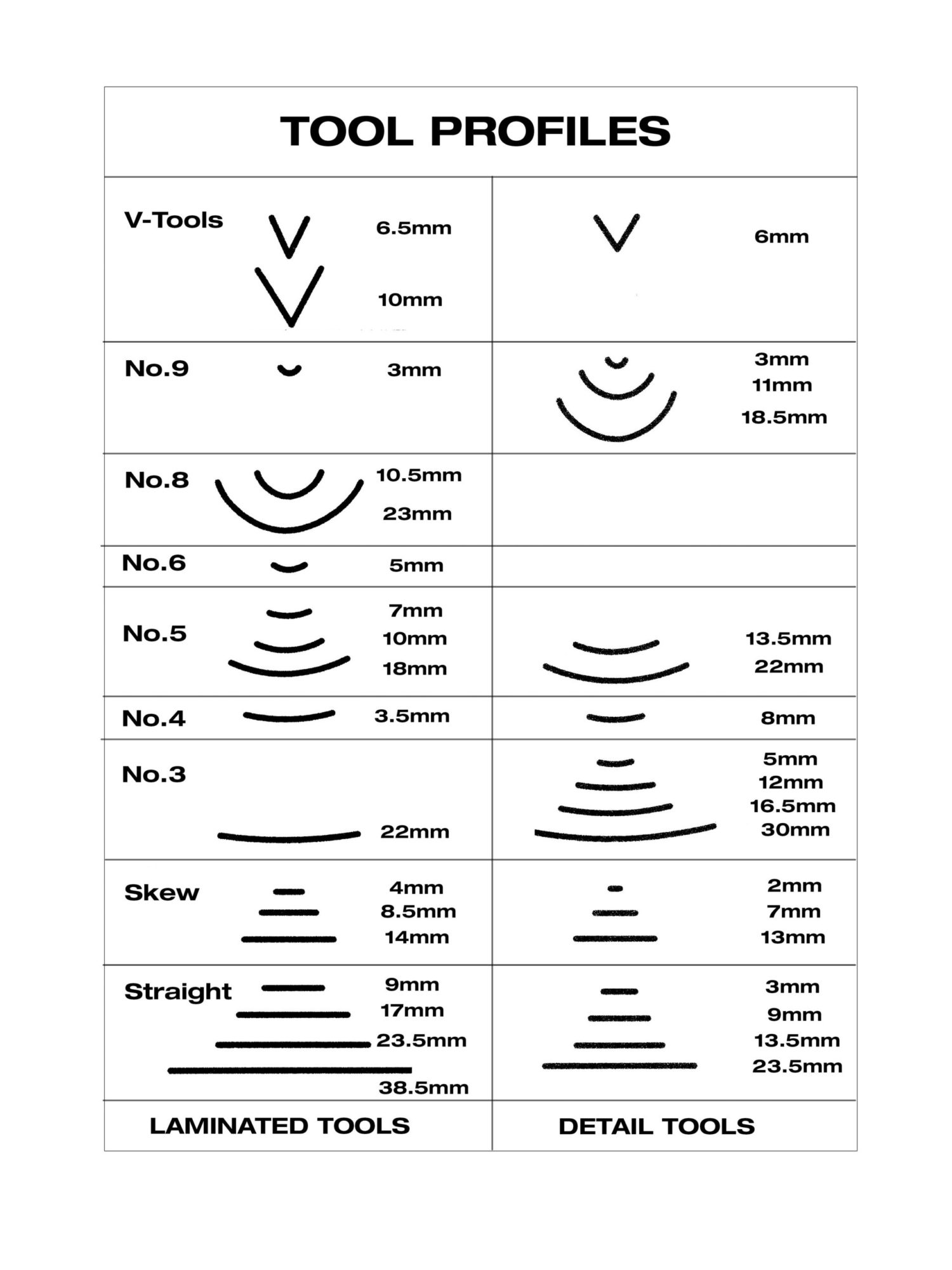 As an amateur carver, justifying the expense of Japanese laminated tools is difficult, so the attraction of a set of 18 Chinese laminated carving tools for about £40 from Dick Fine Tools in Germany seemed just too good. Before taking the plunge, I tried to find a review and although their Chinese chisels had been positively reviewed by Chris Pye in Woodcarving 73, I was unable to find the review I needed, possibly as it's only an amateur that would buy a set of tools. My solution? Buy them and then write the review myself! As a result, I ended up ordering not just the one set of 18 laminated tools at about £40 but also a second set of 18 detail tools for about £20. The resulting sets of ironware received are shown in the photo below.

As much of my carving instruction has been overseas through attending residential courses in Austria and Norway, I prefer octagonal handles. However, trying to locate a source of inexpensive handles in England was difficult, never mind wanting octagonal handles. As the British market is dominated by the major manufacturers with their ranges of pre-handled Sheffield Pattern tools, separate handles are scarce and expensive. Knowing that the Norwegian market is less constrained, I was able to source basic handles from Verktoy AS at £1.00 each and the tapered handles for the laminated tools from Woodware Repetitions in Sheffield at £2.00 each.

I found an article in Fine Woodworking by Bob Smalser that gave guidance on fitting socket handles and finalised the design, which made no allowance for the socket shoulder because of the various different socket lengths. To overcome this, I had to hand-finish each handle to individually fit each laminated tool.With a chuck to hold the handles and the fabrication of a steady to hold the conical end, cutting each individual shoulder was an iterative process. The first handle took 30 minutes to trim and fit; by the 18th, the time was down to half that. By contrast, fitting pre-drilled handles to tangs should have been easy. Unfortunately, I had not thought through the wide range in tool size and tangs. The detail ironware actually fell into three group: small, mini and micro. each of which warranted a different handle shape. The larger tools were well suited to an unmodified handle; the mid-range tools needed to be slightly cut back to enable the shorter tool length to reach the work; and the smallest micro tools needed re-modelled handles. Back on the lathe, the modification for the mini-gouges was simply the fitting of the brass ferrule, achieved in about 5 minutes each. For the micro-gouges it took longer, as a degree of iteration was needed to get the tapered design right. The first handle took 30 minutes, with subsequent handles taking less than 10 minutes each. Before fitting the handles, the insides of the sockets were cleared of the remaining fire scale with a Dremel.

After fitting all the handles, it then took another 5-10 minutes to clean up and polish the rough-forged tools on a DIY linisher, followed by a medium grit composite wheel, and final polish on a rag polishing mop on a grinder. Back to the linisher for sharpening, then finally on to a waxed felt wheel for honing the cutting edge. In addition, an assortment of files, slips and the omnipotent Dremel were used for hand polishing the curved inner edges. All-in-all, the time to mount and finish a laminated gouge was in the order of 40 minutes, and for a detail gouge it took half that: a total time of some 18-20 hours spread over several weeks. Finally, the handles were given a couple of coats of varnish and a final rub-down with furniture wax and synthetic wire wool.

So how did they work in practice compared to tools that an amateur woodcarver might use such as:

2. Smaller laminated and the largest of the detail gouges with Henry Taylor's amateur tools.

The first test was with pitch pine, where the grit naturally embedded in the sample was taking the edge off my tools. So do laminated tools hold an edge longer? Then, to test the larger tools, I used a bit of folk sculpture in Norwegian Spruce, in the Scandinavian Flat Plane style of Harvey Refsal. Here the larger laminated gouges were being put against the professional series from Henry Taylor, a couple of Ashley Isles, and the boxed set Marples sculpting gouges. Finally, to test the scope of just the new tools, I took a piece of English birch (Betula spp) and a Norwegian acanthus style decorative breadboard.During the trials there were some problems; the first was a forging fault in a laminated gouge where hard steel had not been taken out to the edge. Solution: a free replacement.Next, the socket on a couple of the smaller laminated tools had not been properly welded by the blacksmith, leaving a crack in the metal along the length of the socket, which allowed the handle to work loose. Solution: the addition of a brass ferrule over the end of the socket itself.

In conclusion, do read the limitations and intended use set out on Dick's website, and do remember that the mixture of sizes and shapes in a set will not suit all. However, what should not have been a surprise was that the two sets were so complementary. If anything, perhaps there were too many straight blades and no thought given to the laminated skews being handed all one way.For ornamental carving, the selection through No.3-6 worked well, especially the range of No.5s, but with only a single No.6 and no No.7s at all, there was a significant hole; both sets need to trade surplus straight irons for No.7s. The V-tools were excellent, but no veiner.

With the laminated tools at £4.50 each, I have derived a lot of satisfaction from taking them from the blacksmith's rough irons to usefuland practical tools. I feel that their combination of edge-holding and fishtail shape has significantly added to my existing tools. There were some problems but these were easily overcome by a combination of my redesign and Dick's excellent after-sales support, and they do not need to detract from the quality/price equation. I would certainly recommend them to the keen amateur as an inexpensive way of greatly extending the scope of an existing set of ironware, particularly if purchased in conjunction with the detail set, as the two sets are really so complementary.

As for the detail tools at £1.25 each, I feel that at that price and ease of preparation, they are a sensible addition to any amateur's collection. They are well ahead of the generic small starter sets available and well up to the blade quality expected of the well-known manufacturers. I can highly recommend them to any amateur who is capable of sharpening his own tools, even as a starter set. Also they lend themselves to easy adaptation to many professionals as well.

The sets represent good value, even if some of them are irrelevant to your needs, but can you ever have too many tools anyway? Based on material costs only, you are not going to get this sort of quality at such a keen price elsewhere, even if you double my unit-price to allow for the preparation time or tools you may not use. Did I have fun? Yes. Are the resulting tools useful? Yes. What would I do differently? Keep the handle designs simpler so I could turn them myself, and I would include the reinforcing ferrule above the blades from the outset. Would I do it again? Yes, but I do have the time to play as I am retired.